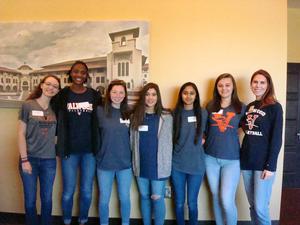 The day is named in honor of Sonya Kovalevsky who was the first woman to earn her Ph.D. in mathematics, according to university officials.

The day is a hands-on STEM – science, technology, engineering and mathematics – event with workshops, speakers and a contest. There were 109 students and teachers from 17 high schools at the 2018 SK Day.

The welcome for the event was given by Dr. Connie Richards, dean of the College of Arts and Sciences, and by Dr. Shaun Ault, department head for the Department of Mathematics.

There were four workshops for the event, university officials said.

Reid led the first workshop titled “Tessellations, Escher and Kaleidocycle.” In it the participants each made a kaleidocycle to take home.

Trowell led the second workshop where the participants discussed their perceptions about people who work in STEM fields.

In the third workshop, titled “Graph Theory, Networking and Games … OH MY!!” Janice Lowe taught girls basic graph theory and games based on this theory.

The last workshop which was led by Dr. Arsalan Wares was titled “A Box Full of Mathematics.” In the workshop, participants used origami to create a decorative box.

The career speaker for the day was Alex Cook. Cook talked about her job as a software engineer at Azalea Health, as well as her past studies and the opportunities in the computing field.

Ryan Hogan for the VSU office of admissions spoke with everyone about educational opportunities at VSU.

There was a 25-question mathematics contest during the day. The participants had a chance for door prizes at both the beginning and the end of the day. While there, teachers and students had a light breakfast and were treated to lunch at Palms Dining Center on campus.

The winners of the contest: