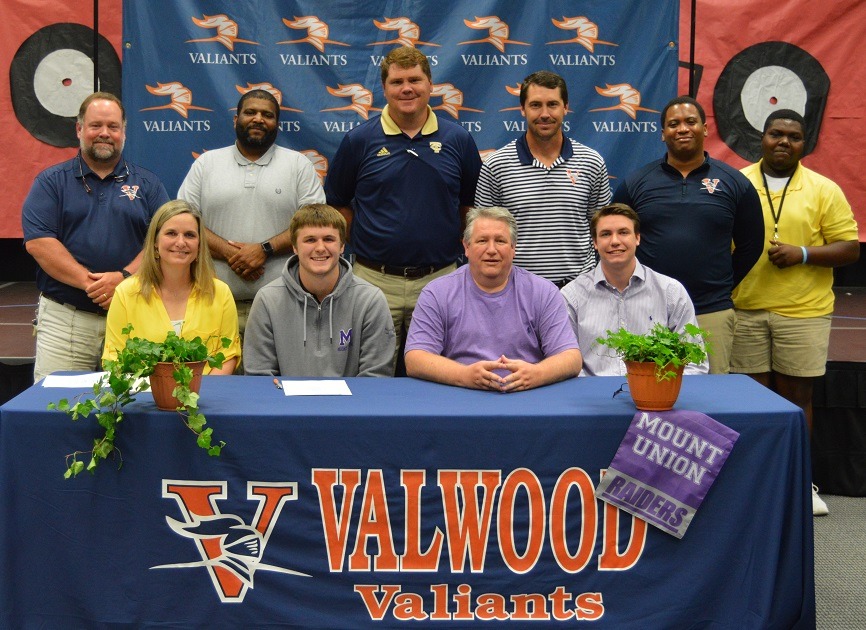 A three-year starter, the 6-foot-1 Mclendon was one of the senior leaders on a Valwood defensive unit that allowed just 8.8 points per game last season. Mclendon ranked fifth on the team with 57 tackles while recording a sack and an interception.

“I’m really proud for Cole,” former Valiants coach Ashley Henderson said. “One thing I’ve always told him to keep in mind during this whole process––Cole’s never been anything but a winner. Going to a winner is important wherever you go and he’s going to the, for the lack of a better term, the Alabama of (Division III) football.

“It’s just another shining example of if you’re good enough, they’re gonna find you. And (Mount Union) found a good one in Cole, on and off the field.”

After making his official visit to Alliance, Ohio to visit the Mount Union campus, Mclendon came away impressed with his surroundings and the Purple Raiders coaching staff.

Mclendon’s experience on his visit combined with Mount Union’s winning tradition that boasts 13 national championships, Mclendon believes he made the right decision to join the Purple Raiders.

“The campus was beautiful,” Mclendon said. “The coaches––they had the right attitude towards me, they treated me with respect as I did them. Of course, the winning (played a role). They’ve been a winning program for a long time, they’ve won a lot of championships––thirteen in the last 25 years so I think just the coaches, the school and winning in general made it a big decision to go to school there.”

After winning two state championships with the Valiants, Mclendon feels he is well-prepared for the next level. After receiving the tutelage of the Valwood staff on and off the field, Mclendon sees the success he’s had at Valwood as a springboard to bigger things with the Purple Raiders.

“I think the coaches here have prepared me enough,” Mclendon said. “They’ve taught me stuff on the field that can be (applied) up there as well but also the life skills and the respect and anything those coaches have taught me off the field has gotten me to this point––having the success to get up to this point, being able to sign with this amazing school to go up there and play football.”

Scurry, the Valiants’ third-leading pass-catcher, posted 23 catches for 388 yards and a touchdown last season. In addition to his success as a receiver, Scurry also formed one half of what Henderson boasted as “the two best corners in the state” along with Cam Walker, who signed with the University of West Georgia earlier this offseason.

The 5-foot-8, 160-pound Scurry’s 50 tackles were good for sixth on the team in that category and his five pass deflections led the team. Despite his stature, Henderson believes Scurry’s skill set and toughness more than make up for Scurry’s lack of size.

“J.D.’s an awesome example of if you’re good enough, you’re big enough,” Henderson said. “He’s certainly good enough. Tough––he played that game against a superstar from Frederica (Academy) with a screw rolling around in his knee. He’s tough as nails.”

Like Mclendon, Scurry was sold on the Mount Union campus and after making his rounds to other schools, Scurry felt the community and coaching staff were ideal fits for his academic and athletic career.

“Over the course of the recruiting process, I looked at different schools––I visited Middle Georgia and visited a couple others,” Scurry said. “Mount Union was an outstanding one. Lovely campus, community overall, good coaching staff and to me, it was my favorite so I thought I’d go with that choice.”

During the state championship game, Scurry was knocked out of action with a concussion on the first defensive play from scrimmage. Though he wasn’t able to put his stamp on the Valiants’ state title victory, Scurry says his mindset for his senior season was ‘to give it my all’ and he feels he succeeded.

The offseason preparation with his teammates and rooting the team on from the sidelines, Scurry says, have prepared him for the college level.

“Coach always made us train hard every day and he always told us not to take any rep for granted,” Scurry said. “My senior year was just to give it my all and I think I did that. With me not playing in the state game, I still cheered on my team even though I hurt my head. That preparation made me be the better player I am today.”

Signing with Mount Union is one of the final chapters of Mclendon and Scurry’s Valwood careers. With graduation upcoming, both players talked about what they would miss most about wearing the navy and orange.

“I’ll probably miss football the most,” Mclendon said. “Playing with your friends for four years, there’s nothing like it. I’m gonna make new friends up there, hopefully, at Mount Union but playing with the people you’ve known for a long time––since you were little, that’s just the best moment in the world. Especially, winning two state championships with those guys as well, it’s the best feeling.”

Scurry added: “I’ll definitely miss summer workouts where we stay in the gym and get to meet and know each other as brothers. You get to find out what your friends like, what they like to do and what they don’t like to do. And you get to see the crazy side of them, so I just think there’s a brotherhood here at Valwood that I don’t think many other schools experience.”