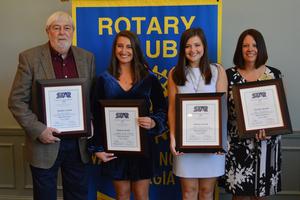 “Throughout my years at high school, I found that the teachers who mean the most to me are the ones who expect the most from me,” Sanderlin said. “They’re the teachers who challenge their students by giving them rigorous course material and encouraging them to push themselves academically.”

Sanderlin said she noticed these traits in both Owens and Allen, and that was why she and Hathcock chose them as their STAR teachers.

Sanderlin said Owens challenged her in the classroom and inspired her to pursue a career in science. She spoke of her challenging AP chemistry course.

“I was frustrated that, for the first time, I wasn’t the best student in a science class; but, as class continued, I realized that being the best student wasn’t really the goal,” Sanderlin said. “Challenging myself and learning good study methods while discovering so many areas of science that interest me was more rewarding. In addition, these are lifelong skills that will benefit me in college and in my career.”

Owens said Sanderlin is involved in many activities at Valwood.

“She is that student that is always helping other students, (and) no matter how difficult the assignment, she always has a smile on her face,” Owens said.

She said Sanderlin was one of the best builders she ever had in Science Olympiad, along with having a positive attitude.

“She took tests; she built helicopters; she was telling the guys that their hovercraft was not working correctly and (she advised) them while she was building her helicopter,” Owens said. “(Sanderlin) just was always one to fill in and do anything I needed her to do.”

“My two sisters, mother and grandmother raved about him (Allen). It’s safe to say that I was expecting a lot; however, Coach Allen exceeds all expectations that one has for an English instructor,” Hathcock said. “Rather than treating us like children, he treats his students as individuals, adults fully capable of diving into the depths of any work of literature.”

She said Allen asked students to analyze the heart of novels, and writing was the cornerstone of his class.

“His prompts push students out of their comfort zones and allow them to develop as diligent readers and articulate writers,” Hathcock said. “As a result, those in his class have the opportunity to form their own individual thoughts.”

Allen said Hathcock was among the best students he ever had. He said Hathcock and Sanderlin were appreciative of and took advantage of opportunities given to them.

“They are both genuinely interested in knowledge,” Allen said of the STAR students.